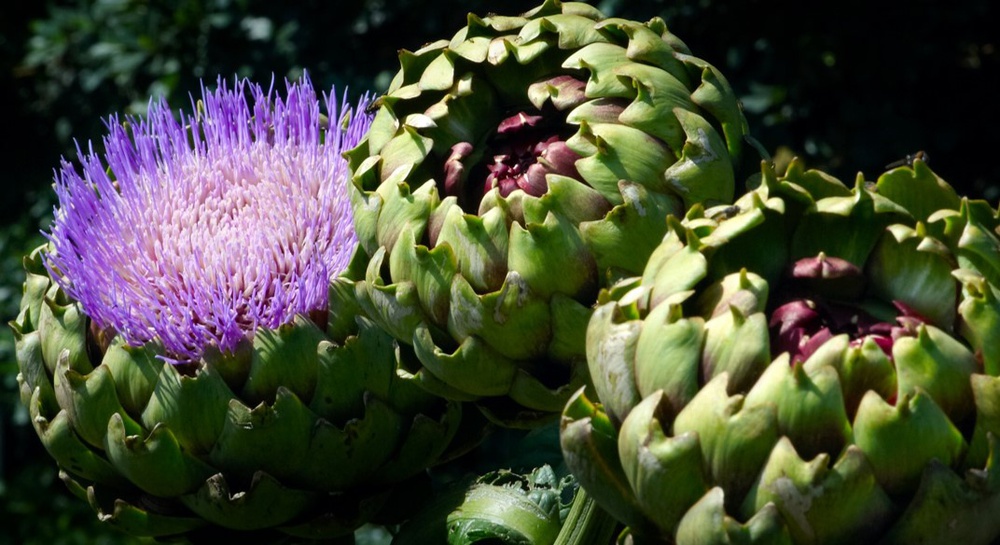 If you are late for work or an important appointment and need to eat something quickly on the go, don’t reach for a fresh artichoke! Wait until you have sufficient time to get through this complex vegetable’s multiple layers so you can savor each tasty morsel and derive the full nutritional benefit. Artichokes are a vegetable that you will want to be able to enjoy leisurely to appreciate their smooth, succulent taste.

Artichokes (Cynara scolymus), a green vegetable similar in appearance to a tiny cabbage, but with smaller and thicker leaves, are an edible member of the thistle family. Not all of the artichoke is edible, just the flower bud, or heart and the fleshy base of the leaves. The leaves, which are sometimes called bracts, cover the center part of the artichoke, which is not edible at all. The inedible center is called the “choke”. It is a clear reminder that before you can savor the best part of the artichoke the delectable heart that lies beneath it, you need to cut off and discard the unwanted part.

Of course, you can order artichoke hearts at a restaurant or buy them frozen or in a jar, in which case all of the time-consuming preparatory work has been done for you. But if you have the time and consider yourself somewhat adventurous, buying and preparing fresh artichokes is an experience you should try, if you haven’t already. You will be handsomely rewarded nutritionally.

Unlike many other vegetables, artichokes only come in a few varieties. Among them are the Green Globe, Desert Globe, Big Heart, and Imperial Star. Cardoons and Jerusalem Artichokes are often described as artichokes as well, but such descriptions are incorrect.

Artichokes do vary greatly in appearance. Their color can range from dark violet to pale green and their size from that of a walnut to a softball. Medium and large artichokes are best served as an appetizer with a sauce. Baby artichokes can be served as either a hot or cold appetizer or as an entree accompaniment.

Fresh artichokes cannot be imported from other countries into the United States. Therefore, the special varieties, like the violet artichokes sold in Europe, are not found here at all.

Almost all of the artichokes growing in the U.S. are this type. In color and appearance, they resemble a very small cabbage. When preparing them for serving, one needs to be careful of the sharp thorns at the tips of the leaves. Green Globe Artichokes are 85% water with 2-3% protein, 7-8% carbohydrate, and no more than a trace of fat. They have a nutty flavor.

Cultivated artichokes are taller than the cardoons they are sometimes mistaken for, but with smaller heads and wider and fleshier leaves. The flowers are blue, as compared to pink flowers on wild artichokes.

Cardoons are an edible thistle similar to artichokes and sometimes confused with them. The difference between a cardoon and an artichoke is that the edible part of the cardoon is the stalk rather than the flower bud. While some European botanists maintain that globe artichokes and cardoons were both derived from the same wild herb, most American botanists consider them to be two distinct species.

Wild cardoons grow to about 3 feet. They have many thorns, and the flowers are much smaller than those of the globe artichoke. Cultivated cardoons are much taller (about 6-7 feet) and have fleshier leaves and fewer thorns and deep blue flowers. A few weeks before harvest time in the fall, they are artificially blanched by shielding them from the sunlight to cut down on their bitterness. Usually, this is done by covering them with canvas, opaque plastic, or cardboard, which makes the leaves white. Cardoons are tender enough to eat raw, but they are usually boiled and served hot, often with cheese or a white Bechamel sauce. They are also sometimes baked or fried.

Cardoons are popular in Europe. In Spain, France, and Italy. In addition to cardoons being served as a vegetable, dried cardoon heads are sometimes substituted for rennet to make cheese. Cardoons are rarely found in the U.S. except in December in Italian neighborhoods. Cardoons are in season in fall and winter, and they are a traditional part of an Italian Christmas dinner.

Cardoons are 90% water, 1-1 ½% protein, and 3-4% carbohydrate with a trace of fat. Cardoons have more vitamin C than artichokes.

Next Article: Artichoke History and Factoids