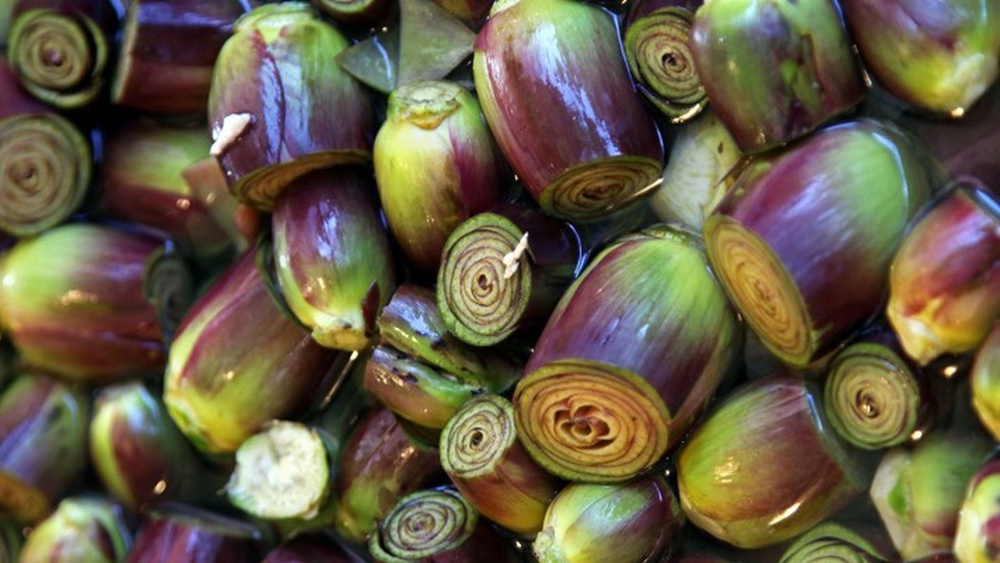 The peak season for artichokes is March-May, with the second season (smaller crop) in October. However, artichokes are available for purchase year-round.

When buying artichokes in the fall and winter, you might find them to have a beige, or dark brown, or black tip. Some may have white spots from being exposed to a light frost. The white spots heighten their flavor.

Artichokes can be eaten either hot or cold, but first, they must be cooked, and before you can even do that, there are various preliminary steps. Start by slicing off the stem from the base of each artichoke. Use a straight cut, so the artichoke will stand upright on the plate. Then, using a paring knife, remove the fibrous peel from the stem. Also, pull off and discard the small outer leaves at the bottom of the artichoke. Lastly, just prior to cooking, the artichokes should be rinsed thoroughly to get rid of any dirt that might be beneath the leaves.

Note that if you are only cooking artichoke bottoms as opposed to the whole artichoke, cooking time is reduced to about 20 minutes. You will still need to scoop the choke out of the cooked artichoke.

Another way to shorten the cooking time for artichokes is to use a pressure cooker. Instead of simmering in a pot of water for 40 or 45 minutes, pressure steaming only requires 15 minutes.

Saving time is not the only benefit you get from using a faster-cooking method. When a vegetable is left submerged in water for a long time, that combined with heat inevitably causes the vegetable to lose some of its nutritional value. In addition to water-soluble vitamins seeping out, some nutrients are heat sensitive. Unfortunately, artichokes are a vegetable for which boiling requires both long cooking and a lot of water Steaming and stir-frying are alternative means of cooking artichokes without compromising the nutritional content so much.

Cardoons also require special preparation prior to serving. First, you need to remove and discard the tough outer stalks. Then separate and cut up the individual stalks and the heart and drop the pieces into boiling salted water with added lemon juice or vinegar and cook for 15 minutes. Remove the strings and white skin before serving.

If the prospect, of cooking an artichoke or cardoon, seems too daunting to you, you might consider serving Jerusalem artichokes instead since they require far less preparation. It is not necessary to peel Jerusalem artichokes before cooking. Just boil them for 20-25 minutes in their skin in water with a teaspoon of vinegar; then peel, if desired, before serving. Other methods, of preparing Jerusalem artichokes, include stewing, frying, baking, and roasting. They can also be eaten raw or added to soups.

How to eat an artichoke

Be thankful that you have been spared the inordinate task that the earliest artichoke eaters faced—figuring out what to eat and what not to eat and how to do it. Those techniques have been passed down through the ages and are now well known, so all you have to do is follow them and enjoy it.

Artichokes are best eaten by pulling off one leaf at a time, starting at the outside near the base. A low-fat yogurt-based sauce makes a nice alternative to the more traditional, but much higher calorie cream or butter-based sauces typically used for dipping.

You can scrape the soft pulp off each leaf by biting down gently with your upper teeth. This may take a while getting through all of the layers, but when the leaves start appearing thin and flimsy, you will know that you are getting close to the heart. Finally, you will get to the fuzzy part of the artichoke.  This is called the choke.  Gently scoop out the choke with a spoon and discard it. But just beneath the choke, lies the most delectable part of the artichoke, the heart, which you are now ready to eat, making all the extra trouble getting there very worthwhile.

Plucking the leaves and preparing fresh artichokes, so they are ready to eat is a fun activity and not as labor-intensive as it may sound. But if you would rather not be bothered, you can buy already prepared artichoke hearts either frozen or in a jar.

Frozen artichokes are already cooked. They are usually baby artichokes that have been trimmed and halved. They are ready to serve as soon as you defrost them. Just prior to serving, thaw them at room temperature; then drain on a paper towel to absorb the excess moisture.

Artichoke hearts are also available in jars. Since they have a strong briny taste, they are best served either alone or with other strong-flavored foods that can stand up to them so that their own flavor won’t dominate.

Freezing is the most popular and effective method of preserving artichokes for later use. Artichokes will keep for about eight months if the correct procedure is followed.

Prior to cooking, cut the top 1/3 of each artichoke into pieces or cut the tips off the leaves and then cut into quarters lengthwise, removing the tough stems and the choke. Then place the artichoke pieces in a lemon water solution ((1 lemon to 2 quarts of water). The lemon will prevent the artichokes from darkening.

The next step is blanching. Blanching can be done either by steaming the artichoke pieces over boiling lemon water or boiling them in the water for 2-5 minutes (depending on the artichoke size). Blanching is necessary to cleanse the vegetable and soften it for packing, as well as to stop undesirable enzyme activity that can cause loss of flavor, color, and texture. However, blanching for just the right amount of time is critical. Under- blanching will not give the vegetable the desired protection while over-blanching will cause significant nutrient loss.

The method is the same except that instead of the artichokes being stored in a freezer container with a lid, they are stored in a vacuum sealer bag.

As an alternative to freezing, small artichoke heads can be preserved in oil. Clean the heads, remove tough stalks, cut off tops, and then cut the heads twice lengthwise. Boil in water to which white wine, salt, and vinegar are added. After draining, place in jars and cover with olive oil flavored with capers, oregano, or chili pepper.

This preservation method is widely used in Southern Italy. Artichokes preserved in this manner left unopened will keep about 2-3 years. After opening, they should be refrigerated and used within a year.